Yes, Kolkata, the largest red light district in Asia. Believe it or not, I went there just for curiosity… Anyway, I found it’s not easy for foreigners to find the place quickly. There is no “Sonagachi” the point on Google Map. To google the name, all the results are not quite clear.

Sonagachi is located in North Kolkata near the intersection of Chittaranjan Avenue and Shobhabazar with Beadon Street.
— You will not find “Shobhabazar with Beadon Street”.
about one kilometer north of Kolkata’s Marble Palace area.
— It’s true, but it does not mean you could find it.
from sova bazar metro station Sonagachi is 3 minutes walking distance.
— Also true, but which direction?

The GPS coordinate on Wikipedia is not accurate as well. Actually, the red light district is not very large as you imagine. The central brothels area is smaller than any large casino in Las Vegas. Especially in daytime – maybe you are afraid to visit at night – most of the brothels seem no difference with other buildings. Walking on the street over 34 Celsius, guessing whether the lady walking around you is a prostitute. What an absurd adventure, I talked to myself.
It took me more than 2 hours seeking between Marble Palace and Sova Bazar, till I give up to find it via Google. I tried to take a tu-tu Taxi: “Sonagachi? Women?” Surprisely (but I like it), many Taxi refused to drive me there. Some of them just showed me the direction. Then I kept walking and asking, finally I found it.

The main streets of the red light district are Gdurgacharan Miira St and Abinash Kabiraj St. In each alley you can see many brothels and pimps and prostitutes, but they are not very far from the main streets.

Sonagachi is dangerous, with its HIV rates and some blackmail issues in the deal. But it is not so dangerous if you just want to have a look. The district is close to city central. On Gdurgacharan Miira St there are food and grocery stores. Many local people live there as a normal India busy area. At the crossing of the two main streets, policemen sit aside the shrine, with or without uniform, but it seems they are just to prevent violence.
Following my instruction, two young girls in my hotel visited Sonagachi at the same night. Of course they gained a lot of weird eyesight. Anyway, at least on main streets, they were secure.

四年后突然想起来那个踩整数点的网站叫什么了（我以前搜过一堆GPS integer之类的关键字都没找到。。。）：confluence.org。匆匆把当年踩巴音布鲁克的帖子翻译了几段贴上去，正在审批ing。
N43E84 @ confluence.org
—————————————–
N43 E84, Bayanbulak Grassland, Xinjiang, China
The point locates about 3.5km away from the nearest road – G217 national highway. The 1089km long “national” highway is just a stony path in this section. The way acrosses mountains, and it was interrupted due to road slides so we had to push the cars over the stones when I came to Bayanbulak two days ago. Anyway it’s only 10km from the village, so I could put the backpack in the village, hitched a local truck to the nearest roadside (N42.58’19” E84.1’20”), and took the short tour.
I crossed two fences in the way. It seems I walked over a range, but there’s no sheep, cow or any people in this season. After 50 minutes I got the point. It’s about 2500m in altitude above sea level. I could see the snow mountains very clearly.
It was not a very happy walking. The scene was definitely beautiful. On the grassland there were many wild flowers. Some brooks hided in the grass until you found them 5 meters away. The water flowing from the mountains was clean and sweet… The problem was, in this dry hot summer, every minute walking on the grassland, there were always more than 10 huge flies around me. Their noise drove me crazy. Sometimes I killed all of them near the brook, but one minute later I was rounded by another lot. 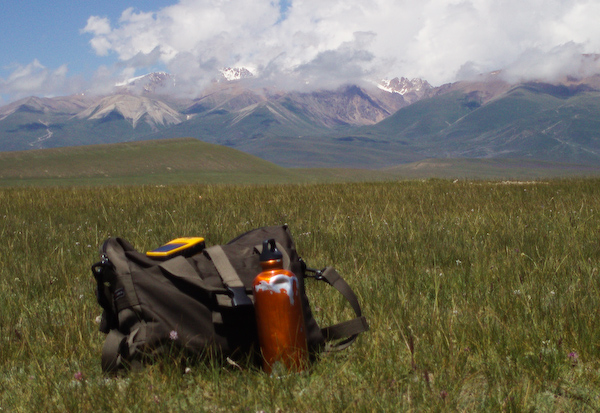 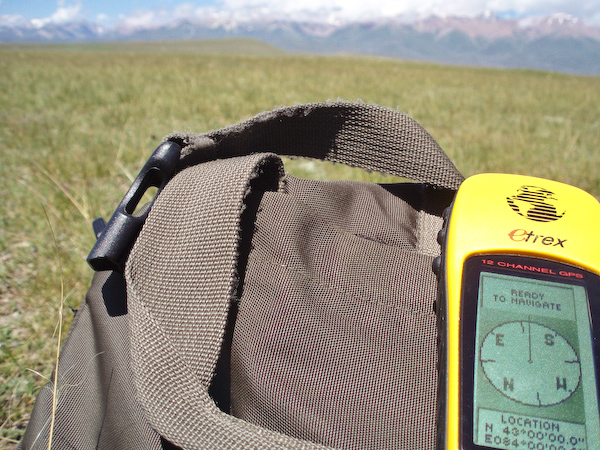